3 Best Practices For Accepting Payments Over the Phone

15 Mar 3 Best Practices For Accepting Payments Over the Phone

Posted at 15:34h in Merchants by Pat Redd

Accepting payments over the phone is common for many businesses. Whether you own a restaurant, retail store or other business, this type of transaction is convenient for both you and the customer.

Every time you process a debit or credit card transaction, that transaction is assigned an interchange rate. This rate is impacted by everything from card brand to industry, but there are some actions you can take to ensure you qualify for the lowest possible interchange rate on every transaction.

Batch out daily. Transactions that sit unsettled in a terminal for more than 24 hours, often called “stale authorizations,” are frequently downgraded. This means you’re paying increased rates for every single one of those transactions. Avoid this problem by setting up your terminal to automatically batch out every day after business hours.

Don’t neglect AVS. AVS stands for address verification system, which is a fraud prevention tool that confirms the address provided by a cardholder matches the address on file with the cardholder’s issuing bank. If the billing zip code is not provided, the transaction will be charged a higher interchange rate, so make sure the 5-digit billing zip code is provided every time you or an employee key in a card.

Ask for the CVV code. Entering the three-digit CVV code from the back of the card won’t impact interchange rates, but it will help prevent fraudulent transactions. Many fraudsters don’t use physical cards—they’ve either purchased a list of card numbers or stolen the information themselves. Either way, without being in possession of the card, they most likely don’t have the CVV code. Fraudulent transactions will inevitably be charged back and that costs money. More on that in the next section. 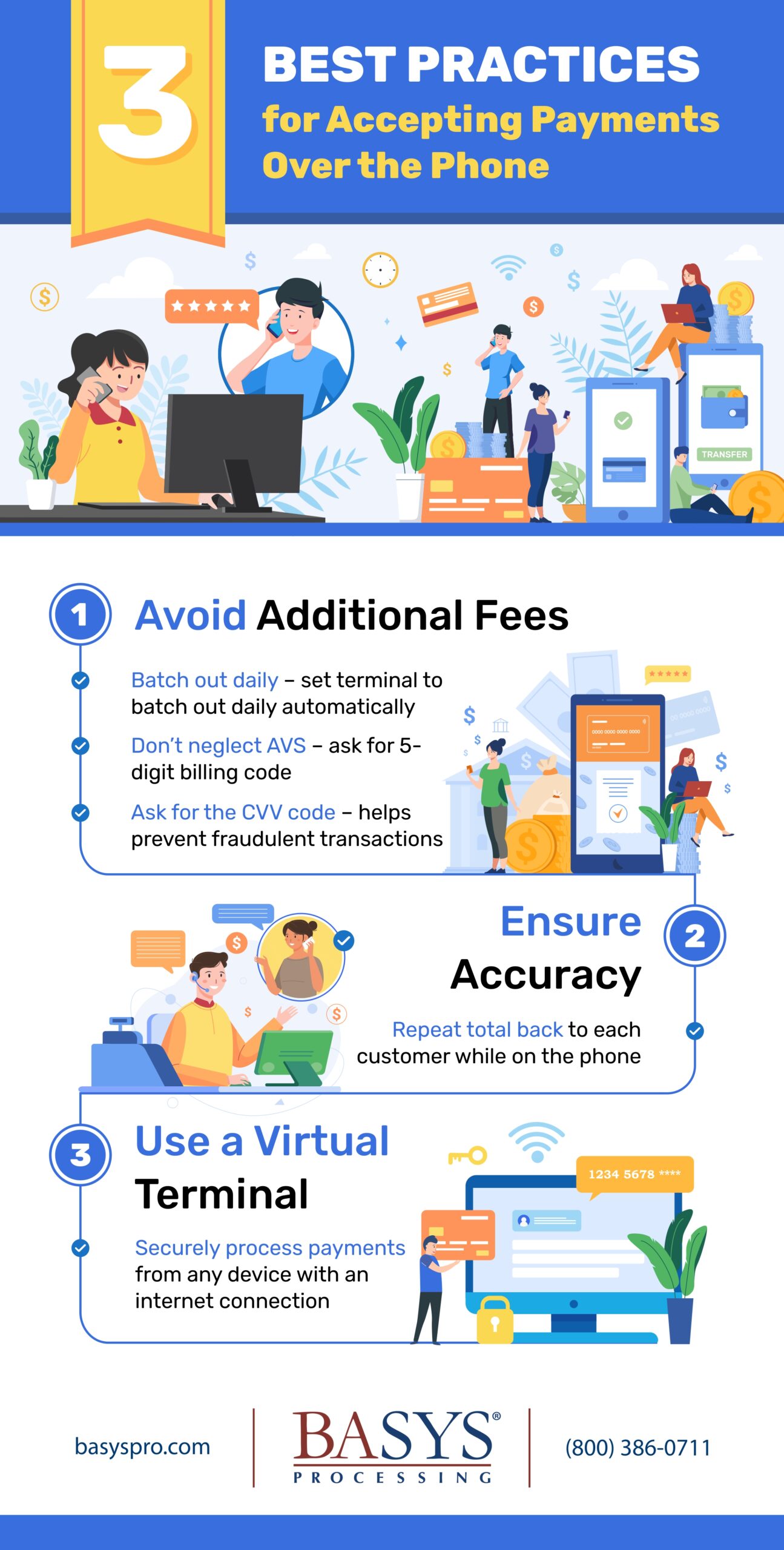 When you key in a transaction, the customer usually won’t have the chance to review their receipt, so data entry errors are more likely to result in chargebacks. Chargebacks are accompanied by a fee of at least $25, and the disputed amount is pulled from your bank account until the chargeback is resolved. Then, to get your money back, you must provide supporting documentation to prove the transaction was legitimate. Don’t have it? You don’t get your money back. Your business does NOT have the time or money for this right now, so please, please, please, avoid unnecessary headaches and ensure data entry is accurate! A best practice is to repeat the total back to each customer while you still have them on the phone.

3. Use a virtual terminal

A virtual terminal allows you to process payments from any device with an internet connection. This provides a secure way to accept payments over the phone or the internet.  This can allow you to keep your business open, and revenue coming in, even if your physical location is closed.  You can accept orders that can be shipped, picked up, or delivered.

If your business accepts payments over the phone, we hope you’ll be able to implement these 3 practices to start saving money today. If you have any questions, please reach out to us at (800) 386-0711, savings@basyspro.com, or fill out the form below.

Does your current processor understand the unique struggles of your industry? Do they provide great rates and personal customer service? Are they offering solutions to grow your business and being proactive about helping you reduce risk and increase your savings?

Contact BASYS today to learn more about innovative payment solutions that will save you time and money. We make accepting debit cards and credit cards convenient, safe and affordable.

• A friendly, live voice will answer the phone when you call; no automated phone systems
• In-house PCI Compliance team to walk you through the process step-by-step, improving security and reducing costs
• Accept payments in person, over the phone or online
• Next-day funding options

BASYS Processing provides credit card and debit card processing services, plus solutions that include terminals, virtual terminals, e-commerce, mobile, and point-of-sale, customized to fit any need.  Banks, associations, and software partners depend on us to strengthen their reputations and relationships with their customers by providing remarkable service paired with ultimate flexibility and pricing. Merchants depend on us to make accepting credit cards and debit cards convenient, safe & affordable. BASYS was founded in 2002 on one philosophy: to take care of our merchants, partners, and employees so they never want to leave. We are dedicated to working one-on-one with our customers to design the perfect solution. BASYS is Personal Payment Processing.